Last consolidation waves in Dutch IT market are in full swing

The year 2017 was an absolute record year for mergers & acquisitions in the IT market. Driven by technological trends such as digitization and blockchain and the deep pockets of investors, the number of deals in the Netherlands amounted to almost 400 – almost double the level four years earlier. drs Rik Stikkelbroeck – one of the two founders of M&A boutique Hogenhouck – shares his expectations for the IT  M&A market in 2018/2019 in consultation with Consultancy.nl.

What do you notice about the consolidation wave within the IT market?
Stikkelbroeck: “What is striking in the current Dutch IT market is the dynamism. As soon as IT companies have recurring revenues, which is common within the verticals of software, hosting and managed services, strategic and private equity parties (PE) are more than interested. Private equity has raised a record amount of new funding in the Netherlands in the summer of 2017 (more than € 4 billion). The persistent political (Middle East, Trump, Korea) and economic uncertainty (cooling down of China, among other things) lead to a capital flight (from private equity) to real estate and SME’s.

Where previously Dutch private equity was mainly interested in recurring business models, you see more and more investments in more project-based IT companies. For example, since 2015 private equity firm Waterland has been active with a buy and build in digital agencies (under the Dept label, including TamTam, Expand Online and Studio Dumbar) and Hoge Dennen is active with Hot ITem (performance improvement) and formerly the Redmore Group. IT companies with less predictable undercurrents that normally work more project-based. The result of this hunger is a broader competition field and with that an upward pressure on multiples”.

Are there international influences that influence the consolidation in the Dutch IT market?
“The IT market nowadays is global. The strong position that the Netherlands takes in this field is evident. Examples are the infrastructure in the field of data centers, the training and knowledge level of employees, the rapid development in the field of cloud services, the location of the Netherlands in Europe as a gateway and our reliable reputation. In short, boundaries are fading. Examples are: the American Insight that Caase (MSP) took over, Mirabeau (digital agency) that was taken over by Cognizant and very recently the Swedish Dustin that mkb player Vincere (€ 80 million turnover in MSP, hardware and services). This interest ensures continued pressure on pricing. If IT companies go for a strategic exit, we see multiples that are almost beyond explanation (for example, Dustin, that in 2017 Vincere took over the ebitda for eleven times). “
What else do you notice in the market?

“Many Dutch IT entrepreneurs started business immediately after their study shortly before the millennium (period 1995-2000). These ‘half-forties’ are often not finished with their life’s work. They realize, however, that downtime eventually means decline. Especially in a market where recruitment was first a challenge and now an acute problem. With such ambitions, it is not surprising that entrepreneurs increasingly opt for a buy & build with private equity. In short, entrepreneurs de-risk now 60-70% of the shares. This means that multiples in the market are now historically high. The entrepreneur rolls through with a 30% -40% interest through the Newco (purchase holding company). If the buy and build strategy yields a match, a joint exit is made in three to five years. So from this angle we see the market consolidate. In addition to strategic activities in the Netherlands (mainly Dutch private equity that is active, such as an Egeria, Main, Synergia, Holland Venture, Strikwerda, Mentha that has a more than average interest in the Dutch IT market), we also notice that agendas of major international players (Microsoft, Cisco, Google) are going to change. For example, Microsoft’s agenda shows that it wants to reduce the number of resellers in the Netherlands, in short, Microsoft as the implicit ambassador of the consolidation. 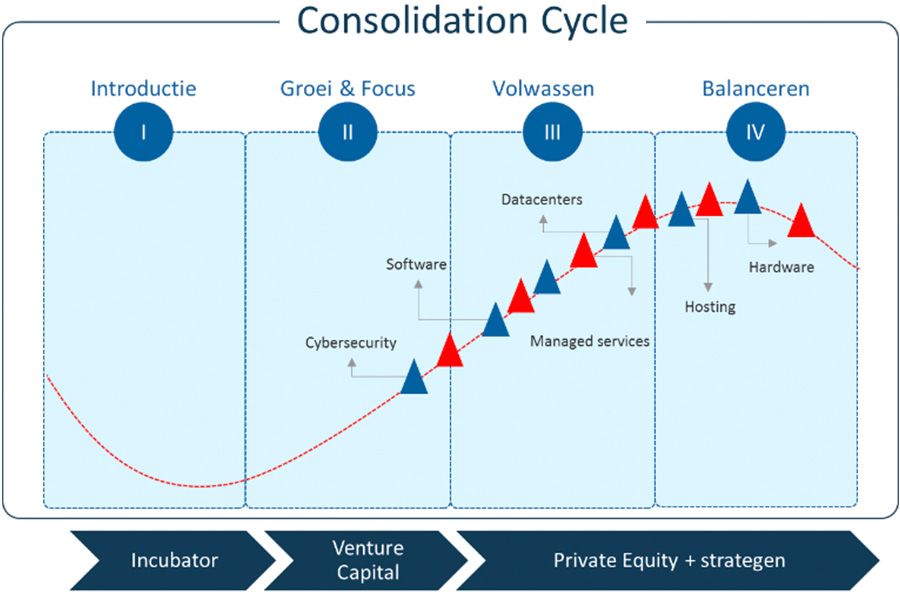 At what rate do these consolidations take place?

“In an earlier interview I indicated that the real consolidation wave in the Dutch IT market will be completed in 2020. That comment deserves further explanation. The IT hardware market is virtually consolidated in the Netherlands in 2018, with recent acquisitions of Central Point and Scholten Awater by our Infotheek Group relationship as an example. A development to which we, as Hogenhouck, are making debts, as Infotheek Group’s trusted advisor since 2008. As a result, the number one player in circular IT in the Benelux has emerged (in the year 2018 this represents approximately € 800 million in sales). An important consolidation wave has been completed in the hosting sector. With private equity parties Strikwerda (TWS group including Your Hosting, PCextreme and VIP Internet) and Waterland (Sentia that is active in the Netherlands, Belgium and Denmark with, among others, Vellance, Jaynet and Solido) two major players have emerged. Players who will look for an international exit in the long term (2020-2022). “

“Now seems to have come the time for a consolidation in the managed services market. Where there was already movement at SME level (such as the consolidation of Stepco / Advo in 2012 and the recent emergence of parties such as the Solimas group and SME Fund with its Future Proof Group), the game now seems to be really on the wagon. The parties focus on the one hand on the SME market; see, for example, the acquisition in July 2018 by Dustin (Sweden, listed company) of the Vincere Group. On the other hand, strategists (parties such as KPN, Claranet, Insight) and private equity focus on the enterprise market. So in addition to the consolidation in the SME market (workplaces between 25-100), the consolidation in the enterprise market (parties that serve the 200+ workplaces) has now started. “
What does the Dutch IT market look like in 2020?

“The Dutch IT market can be reasonably read in 2020 on a broad scale. We can be brief about the IT hardware and hosting market: those tickets are made and the parties will look for an international exit in 2020. In short, more international players are coming to the Netherlands. The managed services market will be largely consolidated in 2020. The buy and build of various private equity parties will be in a ‘mature’ stage by 2020 (read: add-on acquisitions have been made from a platform). This market will further professionalise in MSP parties of € 100 million + turnover in size. This development does not mean, however, that small MSP parties no longer have a right to exist, but organic growth will be more challenging and in time there will be more pressure on margins. We now also see this in the hosting market (we expect the picture to be roughly in 2020 as the figure above). A lot will be consolidated in the software market (both from strategists and private equity). The cybersecurity market will have made the step from venture capital to strategists (think of KPN, Vinci, F-Secure) and private equity investors (Main Capital, Strikwerda, et cetera). “

What is your advice for IT entrepreneurs?
“The well-known old Dutch saying ‘stick to what you are really good at’. It is completely situation-dependent what the right exit can be. What are your ambitions as an entrepreneur, how high is the energy level – read: how long do you want to remain actively involved -, where does the market develop, what exposure do you want to run in a growth market, do you opt for organic growth or growth through acquisitions, do you want to do acquisitions independently or in combination with a private equity party, or do you opt for an exit to staff (management buyout) or strategist? “

Stikkelbroeck concludes: “We regularly talk to entrepreneurs where the above questions are on the table. From our role we give them push back on that possible sales wish. In the end, you determine the momentum, the conditions and manage the expectations. The choice when to take the step and with whom is crucial. A choice that should not go as we say in Holland “you cant walk on water after only one night of ice”.