M&A continues to drive consolidation in Dutch IT market

Total merger & acquisition activity in the Dutch IT market reached record heights over the past two years, and to date, 2019 is continuing the trend. Scale deals aimed at consolidation are a major driving force, in particular in the segments of software, services and IT staffing. Rik Stikkelbroeck, managing partner of M&A consulting firm Hogenhouck, reflects on this year’s market so far and on the key development for the remainder of the year.

What strikes you about the Dutch IT market?

Notable is the accelerated rate of consolidation which is taking place in the Dutch IT market, and the diversity in segments and niches in which this is happening. Also notable is the growing interest of international players, both from international strategists as well as private equity firms. Current sentiment in the market points at a boiling point that will be reached in 2020.

Which IT verticals are most in-demand?

In the IT software sector, several deals are taking place, with ownership moving from one private equity firm to another. A good example is fast growing IT software company Exact, which saw its ownership change hands from the UK to the US (from Apax to KKR). Also, Dutch players such as Main Capital are increasing their stakes in the segment.

In addition, we are seeing growing cross-border activity. The sale of RoxIT from Main Capital to the Norwegian company Visma (which is supported by active majority shareholder HG) is an example of this, as well Cegeka (backed by GIMV), Exact (backed by KKR) and Visma (backed by HG). Vice versa, international private equity firms are upping their ventures in the Netherlands, take for example the recent stake of Carlyle Group (US) in Microsoft Dynamics specialist HSO. 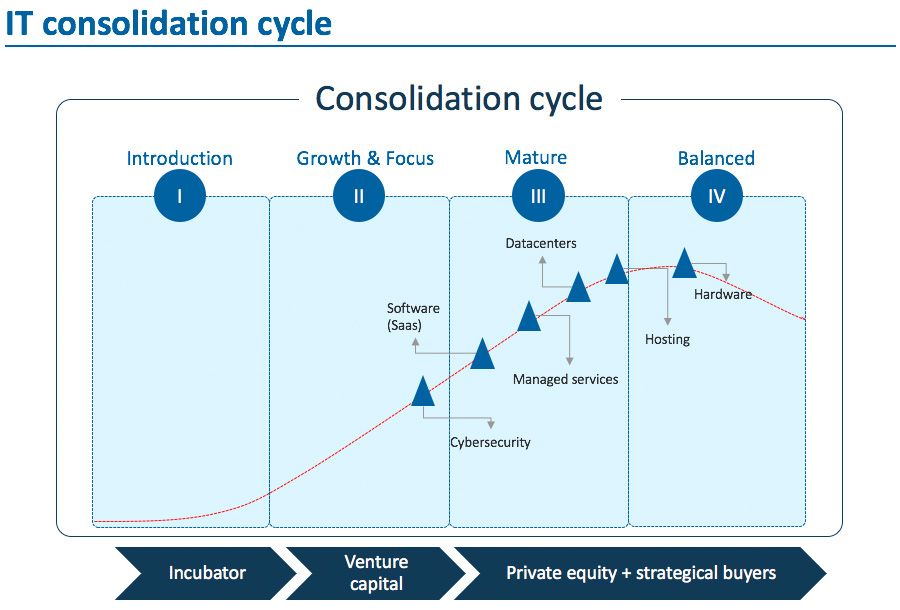 Consolidation in the managed services market is another trend. Examples include the sale of Vincere to Dustin, Odin to Fortino and Wortell / ETTU to Holland Capital. Add to this the spike in software testing deals (e.g. Holland Capital buying software tester Valori and Green Park investing in Bartosz) and the picture is clear: it is rush hour in the Dutch IT market.

Interestingly, private equity companies with no heritage in the IT sector are nestling themselves in the market. Hoge Dennen for instance invested in Hot Item and Foreman Capital invested in cloud IT and telecom provider Into.

I believe the software market tops the list. Large players such as Visma, Exact and Main Capital are driving this development. Main Capital has closed a transaction in the Netherlands and Germany in every single month of 2019 so far, Visma recently closed transaction number six in a short time and, with the fresh financial muscle of KKR on board, Exact is bound to be active in the M&A space. Strikwerda and Waterland – both Dutch private equity firms – are also players with high activity in this segment.

The top three in-demand segments will be rounded off by the managed services and hosting / data centre markets.

What about international opportunities?

Many of our IT relations regard powerhouse economy Germany as a sleeping giant. The German market is highly fragmented and is, compared to the Netherlands and the Nordics, quite conservative. In particular in the managed hosting, managed services and data centres segments, there still lies a plethora of opportunities in the German market.

What should Dutch IT entrepreneur be keeping an eye on?

For many medium-sized Dutch IT companies, further consolidation in the Netherlands will be a priority: eat or be eaten. Either grow as a standalone, or team up with investors to pursue a buy-and-build strategy.

The multiples abroad are on average higher than in the Netherlands. For example in Germany, SME multiples are comparable to mid-markets in the Netherlands; often larger companies with more sustainable revenue and EBITDAs. In the Dutch IT market we see that in a number of segments the multiples have stabilised at 5x to 6.5x EBITDA for limited recurring IT companies (project-driven firms) and between 6x and 8x EBITDA for IT companies with a high stream (> 60%) of recurring revenue.

Data centres and internet Service Providers are excluded from the above multiples due to the real estate / infrastructure component, meanwhile, managed hosting parties can also count on double digit multiples (between 10x and 14x EBITDA) due to their positioning in the market and long-term contract structure. In the storage market, we expect multiples to cool down in the short term.